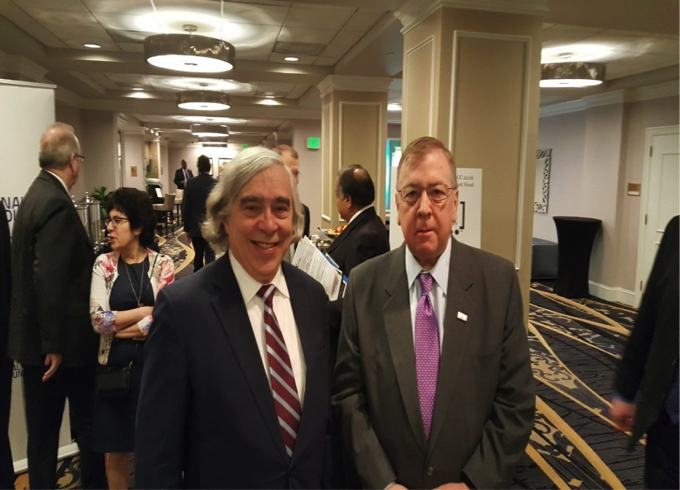 Judd Swift, CEO of Synfuels Americas, attended the National Coal Council (NCC) Meeting on April 20, 2016 in the nation’s capital. The National Coal Council is a Federal Advisory Committee to the U.S. Secretary of Energy on issues related to the coal industry. The keynote presentation was provided by the co-founder and executive director of the Clean Air Task Force (CATF), Armond Cohen, and the keynote address was given by the United States Department of Energy’s Secretary of Energy, Dr. Ernest Moniz. The meeting focused on the need for solutions that level the playing field between the diversity of energy resources and technologies currently and newly available for research and development (R&D). This is of particular importance to sustainably utilize the abundant reserves of coal and implement carbon capture, utilization and storage (CCUS). Specific presentations also addressed ultra-supercritical technology for coal-fired power plants, carbon engineering, and the new international integration of the iron, power and steel industries.

While the NCC meeting focused on using coal for power production, other uses for coal are impacted by the meeting’s recommendations, including technology that upgrades coal to high-value carbon products and chemicals. This was the focus of the presentation by the director of the Carbon Management Institute, Kipp Coddington, at the University of Wyoming. For Synfuels Americas, this could mean that a commercial-scale coal-to-liquids facility using our proprietary coal upgrading technologies may become economically feasible in the United States. One key advantage of our Fischer-Tropsch process is that it is possible to capture up to 70% of the carbon dioxide at a facility as a commercially-pure stream without any additional expenditures for specific carbon capture technologies. Any incentives for projects that utilize coal with significantly lower carbon dioxide emissions would also benefit the higher overall energy efficiencies realized with advanced coal conversion processes—given that they utilize not only the heat-value of coal for steam-based power production, but also the rich chemical composition of coal for fuels and other chemicals. Synfuels Americas is actively seeking partners and collaborative opportunities to research, develop and implement advanced energy technologies and processes internationally that are technically, economically and environmentally feasible.