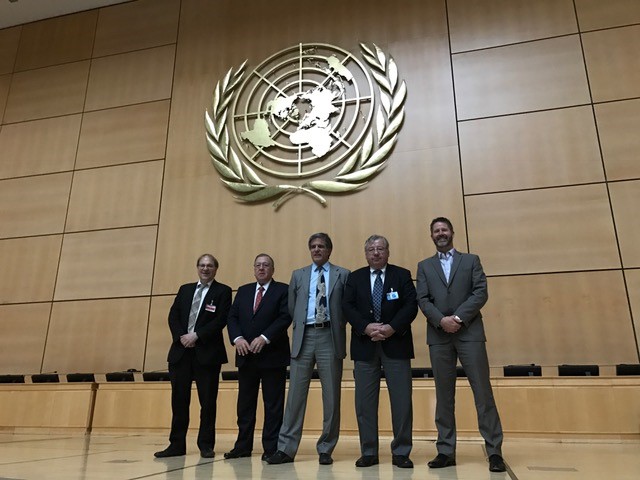 The United Nations Economic Commission for Europe (UNECE) was established in 1947; it is one of five regional commissions of the United Nations. UNECE includes 56 member States in Europe, North America, and Asia. Mr. Judd Swift, CEO of Synfuels Americas, was invited to present at a workshop on The Sustainability Credentials of Coal and its Role in the UN Sustainable Development Goal 7 for Affordable and Clean Energy during the UNECE’s 12th Session for the Group of Experts on Cleaner Electricity Production from Fossil Fuels in Geneva, Switzerland on October 26-27, 2016. Representatives from the United Nations, World Coal Association, IEA Clean Coal Centre, Turkish Coal Enterprises, UK CCS Research Centre, Global CCS Institute, General Electric, Bellona, and the United State Energy Association also presented. The workshop included topics covering regional outlooks for coal, challenges of high efficiency and low emission (HELE) coal technology, pathways from HELE to carbon capture and storage (CCS), and other policy pathways for coal.

This event was an excellent opportunity for Synfuels Americas to showcase alternative applications of Synfuels China Technology’s liquefaction technology in front of representatives from the UNECE. Coal to fuels and chemicals (CTX) had not yet been considered as a topic at the UNECE until Mr. Swift’s presentation and it generated quite a bit of interest in the potential of integrating Fischer-Tropsch synthesis with power and heat production for poly-generation.

A critical outcome of the workshop was the heightened awareness of the efficiency and emission opportunities from increasing the production flexibility of coal-fired power plants by replacing them with poly-generation plants and switching from coal combustion technology to coal gasification technology. One route to realize this opportunity is to support additional R&D to increase the production flexibility of integrated gasification and combined cycle (IGCC) plants to include not only power and heat, but also fuels and chemicals (i.e., poly-generation).

The main challenge for not only coal, but all fossil fuel utilization in the future energy mix, is developing a sustainable carbon management strategy built upon social, economic and environmental pillars. To help address this challenge, there must be policy parity between all low-carbon technologies. A key assumption is that policy parity among low-carbon technologies would help regions to quickly deploy carbon capture, utilization and storage (CCUS) processes.